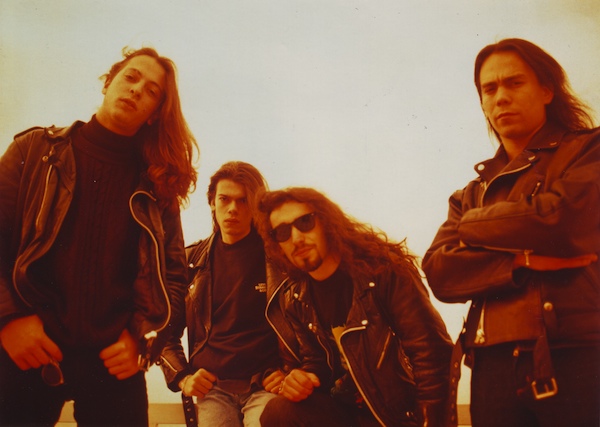 [scroll down for biography]

On the Hills with Haze… Forever!

The following is the biography from HazyHill.com as it appeared in 2000:

Hazy Hill is a four-piece Metal band, formed in Ankara in September 1988. Their first public performance was 3 months later, followed by a series of local shows. In June 1989 the band recorded a five track demo tape but due to unsatisfactory sound quality they did not release it. Later, the same year, Hazy Hill played their first major show which was in the city of Izmir in front of 1200 people.

In January 1990 Hazy Hill went into a 16-track studio and recorded their debut demo MURKY BEDLAM and the results of this recording were much more acceptable than their previous effort. Following its release in July 1990, the demo was picked up for airplays on radio stations in various countries and also on radio TRT (Turkish Radio Television) and for reviews in magazines and fanzines from all parts of the world. At that time Hazy Hill was the first Turkish Metal band to have their music heard and their name spread on the worldwide basis. The initial response to the band’s music has been very good, with critics calling them both promising and original.

Between January and July 1990 Hazy Hill played a number of shows in Ankara and Izmir to a total of several thousands of people, with one show in Istanbul, in Open-Air Theater where Jethro Tull, Duran Duran et al played, attracting a further 1000 fans. Two more dates in Izmir were to follow – one with the seminal Norwegian band Mayhem, further boosting their popularity in Turkey.

The biggest show uptil then came in May 1991 when they headlined a stadiul concert at the ODTÜ (Middle East Technical University), in front of 4000 people. In July, after playing a couple of gigs with a Dutch band in Ankara, they flew out to Austria for a one-off performance in Vienna. This one-off visit was to add further to their growing list of ground breaking achievements for a Turkish Metal band; they were the first Metal band from Turkey to play in a foreign country. Hazy Hill’s “live” success has the band hailed as Turkey’s Best Live Act of 1991 and the pioneed demo MURKY BEDLAM as the best demo tape.

September 1992 was the date for the release of their long awaited follow-up demo FAN OF YOUR FANCY. The three tracks featured on this demo displayed a new maturity in the band’s songwriting and performing abilities. The demo was successfully promoted in Turkey and on the worldwide basis via TV, radio, fanzines, magazines and newspapers. In less than a month following its release, Hazy Hill have sold over 500 copies of FAN OF YOUR FANCY by post.

FAN OF YOUR FANCY was chosen as the best demo tape of Turkey in the readers poll in 1992. Consequently Hazy Hill shows started attracting more and more people.

March 1993 marks the band’s second international live experience, this time in Germany with two German acts. A little later, Hazy Hill played their biggest show in their career in May 1993 at the ODTÜ (Middle East Technical University) in front of 5000 fans.

1995 started with a very busy schedule; along with the shows, the band also walked into the studio once more and recorded 10 songs. Out of these 10 tracks 4 were chosen and TORCH-IN’ THE NORTH POLE saw the light of the day. With four strong songs, a good sound and an attractive pacakge TORCH-IN’ THE NORTH POLE would be a killer without a doubt but suddenly, and shockingly, Hazy Hill decided not to release it and put an end to their 7 year career with a farewell show, no sufficient reason being given. This 140 minutes long farewell show in Ankara was the hardest gig in Hazy Hill’s musical life and they were parting from their fans.

In March 1999 Hazy Hill realized that they were having real hard time keeping apart from playing. That was the beginning of a reunion. The band decided to record five new songs and along with these newies gather all the old material on a single album. They also decided to play live again, as they missed the excitement they felt on stage so much, but with a more relaxed schedule compared to their heavier schedules earlier in their career.

HAZY HILL’s new album 8800 was released in February 2000 on Sis Productions. This 17 track, 74 minutes long album includes all the songs from their previously released EP and demo tapes, Murky Bedlam (1990), Fan Of Your Fancy (1992) and Torch-in’ The North Pole (1993/1995), plus 5 new studio tracks, Bleeding For a Dream, Fear And Sorrow, This Emptiness, Point Blank and Nothing But Just a Memory. Various musicians on vocals, guitar, acoustic guitar, keyboard and piano joined the band in these sessions.

[…] projects, including films screened in international films festivals; and recorded and toured with Hazy Hill between […]